Much of the time, as I force feed vegetables and limit tv hours I feel as though I may be the sole adult in this house. However, when it comes to car journeys the tables turn and really, I may as well be in the back squabbling over legroom. I hate long car journeys. Loathe them. I’m rather a nauseous voyager and am unspeakably bored by the time we’re at the end of the drive. The backseat passengers, I hardly need say, are every bit as bad.
My in-laws live over 200 miles away from us, in Norfolk, and as a special nanna birthday approaches, so too does the threat of endless hours on the A11. With this in mind, I have been thinking about strategies to make this as painless as possible.

Travelling at night. Not always an option, but if possible, particularly when they were tiny, we would bundle them into jimjams and set off at bedtime. We have friends who set off at 3 in the morning. It works for them, but I find we simply end up with fractious children who have been awake – and fractious – since 3 in the morning.

Snacks. Lots and lots and lots of snacks. I find breadsticks and crackers to be good, though they’re shamelessly crumbtastic. Malt loaf is a good crumb-free option but my older daughter would rather go hungry. As a sicky traveller myself, I find that endlessly filling my pie hole keeps the nausea at bay. Gingernuts are good here, but then, there’s never a time I couldn’t force down a gingernut. A golden rule for me, is that it doesn’t smell (unless it smells of gingernut) I would have to get out and take my chances with National Express if someone peeled a ripe banana. I’m sure my husband finds these quirks adorable, though come to think of it, he’s never said as much.. 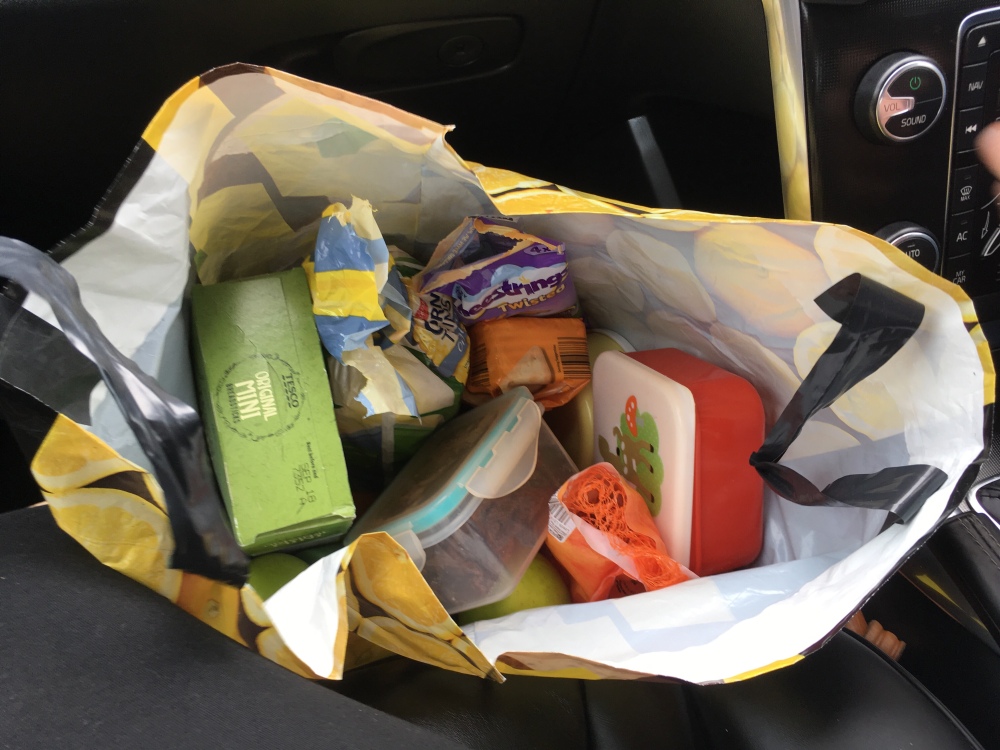 Visual entertainment. Obvs an ipad or portable DVD player is going to help all but the most highbrow of nippers. We have one, similar to this

which we wedge between the front seats and has been worth its weight in gold. Obviously, the arguments over which films to watch have sometimes lasted as long as the journeys themselves, but at least it’s a different argument and sometimes this is as much as can be hoped.

Audio entertainment. My children, given a chance are die-hard square eyes, but even they can tire of viewing by the time we’re skirting Swaffhan. If ever our life depends on being able to display flawless repetition of the Muppets Most Wanted soundtrack, all four of us will be completely fine, but sometimes the diverse music tastes represented by the passengers can prove difficult to reconcile and in this tense atmosphere, audio books work very well, I find. After several years, I am almost word perfect on the Malory Towers chronicles, and STILL amused by the accents – Sadie, wisely, never reveals which part of America she hails from – and the cost/listen must be into fractions of a penny. Usually you can get a month free with Audible and can then cancel without paying anything. I urge you to do it.

I-spy. Perhaps you’re a better parent than me and find I spy a charming way to bond with the backseaters. Or maybe, like me, you’re bored of it within moments and are aggravated by poor spelling and your opponent claiming to spy things THAT DON’T EXIST. (“NO, there was no zebra.”) In that case, these books

might fit the brief. We have used them with reasonable success.

On a similar theme, these Usborne activity cards

And of course, we always buy a magazine as a treat before we set off, though the little plastic cakes or miniature Peppa Pig swing set that urged the purchase are usually lost under a front seat before the house is out of sight…

All other tips on making this more bearable would be gratefully received.