My childhood holidays were numerous and wholesome, filled with blustery mountainsides and cycle paths and campsites, and now I find myself repeating the pattern with my own little badgers. This last weekend we had the most lovely stay in the Yorkshire Dales, where many a childhood half term was spent – I was reminded of just why it makes such a good place for a family break. 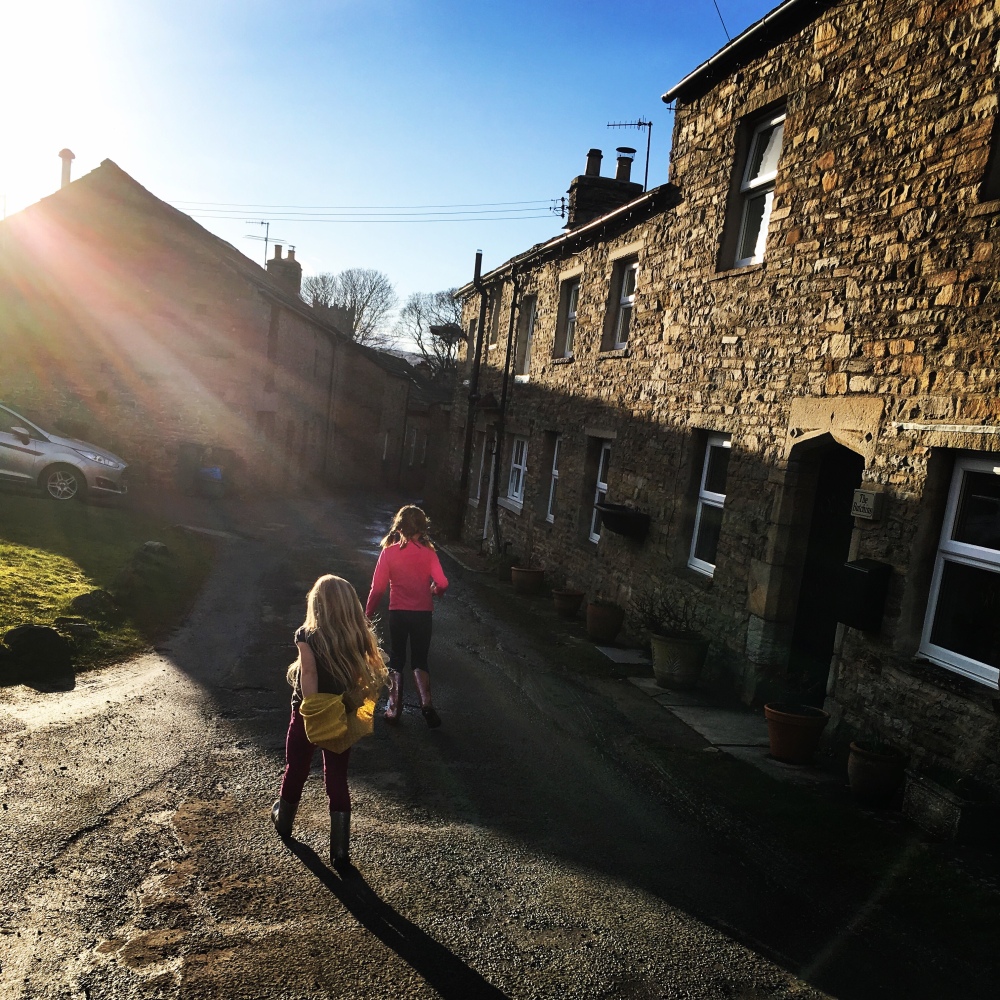 We stayed in a little cottage booked through cottages.com, which was easy and problem-free, and on this site and many others there are a plethora of lovely houses and apartments available for most group sizes.

Of course there are loads of different options for accommodation depending on your budget and tastes. If you’re after something fancy, then there are plenty of multi-starred hotels, including The Traddock near Settle and The Yorke Arms at Ramsgill, with its Michelin-starred restaurant.

If you’re trying to keep costs down, then there are any number of campsites – indeed one in Sedburgh was our first familial foray under canvas in the May half-term of 1984. It was the coldest on record, so family legend has it, and none of us took our coat off the whole time, but presumably by then we’d forked out for a camp kitchen and 5 airbeds, so we were enjoying ourselves one way or another.

If camping isn’t your thing, but budgeting is, then another option could be one of the many Youth Hostels, such as the one in Hawes or Tan Hill Inn. I’ve stayed in hostels on school trips and they are pretty basic, but they are clean and secure and generally well-situated for lots of running wild outside. Kids love them. They have family rooms available so you wouldn’t have to be sharing a dorm with a herd of teenage Erasmus students either. I haven’t tried it with my own children, but I’m planning to give it a whirl.

We stayed in a lovely cottage in a little village called Askrigg, in Wensleydale, not far from the slightly bigger town of Hawes. Askrigg has three pubs, a church, a village shop and café and a children’s playground and loads of fields and paths and farm animals – perfect for a bit of exploration.

We went to The King’s Arms which you may recognise from All Creatures Great and Small, if you had an 80s childhood like I did. I imagine the gin selection these days is more extensive than in James Herriot’s time – I had a rhubarb one which was delicious and terribly fancy with bits of actual rhubarb in a big fancy glass. We didn’t eat there, but my parents did and said it was one of the best pub meals they had had in ages – it was packed on both visits, so clearly other people have found the same.

Hawes was bustling when we visited on Saturday morning and we passed a couple of hours easily – a tiny little café, The Folly, on the main drag, with a friendly and welcoming owner served good coffee and excellent Fat Rascals and the decent sized park with some vintage play equipment kept the children entertained. You could get your essentials covered here – there’s a Spar, a lovely deli, a pharmacy, bookshop, antiques and homeware shops – you won’t wonder if you’ve stumbled into The Trafford Centre, but that’s no bad thing. The Dales Countryside Museum is child-friendly and might be a good idea on a wet day.

We called again on the Sunday with the intention of finding lunch. Our reception in The White Hart wasn’t overwhelming and we were informed that there was no room at the inn when we were finally acknowledged. It was full, so they must be doing something right – I presume we caught them at a bad moment. Perhaps you’ll have more luck. By this time we were faint with hunger and decided that the next available eatery would be ideal – it happened to be Caffe Curva where the welcome was warm and the food was pretty good. I had Ham Hock Hash and it went down a treat.

Leyburn is an appealing market town, about 17 miles from Hawes, with independent shops and cafes. We had lunch in KTea’s Tearoom (chosen by my children for the pretty window) and very nice it was. The food was tasty and beautifully presented – I had a panini with sausage and Stilton and caramelised onions and it was very enjoyable. The cakes were enormous and delicious. I would definitely recommend a visit.

We did a spot of shopping in Campbell’s, a brilliant independent supermarket, crammed with lovely things, many of them locally produced, and the sort of gin selection that made me a bit giddy. The town also has a decent sized Co-op, which is perhaps more purse-friendly and could certainly stock you up for a week.

Really though, as nice as the little towns and their independent cafés are, the reason to go to the Dales is to do wholesome outdoorsy things and let your little lambkins run wild in the countryside. Obvs, like most children, mine are reluctant to walk more than a few steps when it pleases them and most inconveniences me, but throw in a woodland, some little hills (hillocks? I’m a town dweller) to run up and down, and some logs and rocks to jump between and they can keep going for hours. Where 2 Walk has loads of suggestions of short walks suitable for children. Miles Without Stiles is a good resource for anyone considering a countryside jaunt with a wheelchair, pushchair or a party member with more limited mobility.

We visited Aysgarth Falls, which are rather lovely, and pretty dramatic when the River Ure is full. We parked at the visitors’ centre (with shop, café, toilets and picnic area; parking £2.50 for 2 hours, £4.50 for the day) and crossed the road to walk down to the Middle and Lower Falls. The sun was shining, there were but a few occasional cheery dogwalkers at 9:30 on a Sunday morn, the children forgot to fall out – it was lovely. We followed the path for about a mile, taking the steps down to see the falls along the way. I clutched onto the five-year-old in a slightly frenzied manner at a few points, but with a close eye, it’s all fine. We walked back some of the way on the rocks on the river bank, but if you have anyone particularly unpredictable and lively, you can just walk back along the path instead. 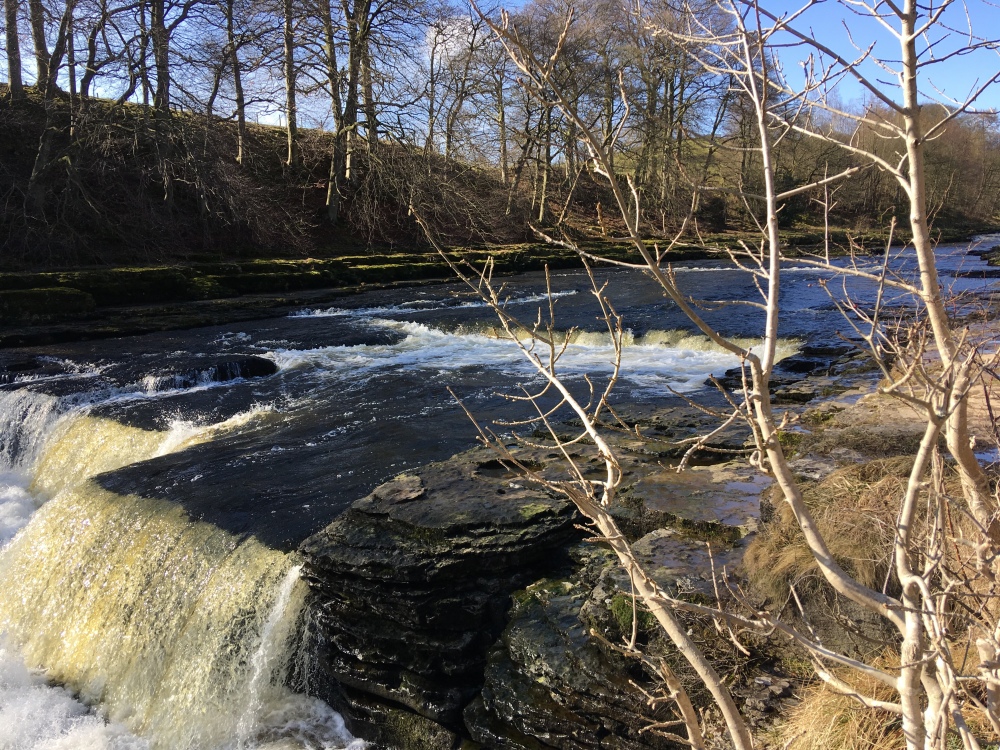 A friendly local offered to take a picture of us – generally, we’d be hard pushed to prove we all holiday together – and told us that parts of Robin Hood, Prince of Thieves had been filmed along that stretch of river and that she’d been looking for Kevin Costner ever since. I kept my eyes peeled so I could report back, as she was so nice, but there was no sign.

A few other days out in Wensleydale – we didn’t visit all these ourselves, but they have been recommended by reliable sources.

This website has lots of ideas for keeping kiddiwinks entertained.

Maybe some of this will encourage you to visit the Yorkshire Dales  – I do hope so, it really is a good place for a short break, especially with kids.

If you have any top tips on the area, please do get in touch – I’d love to add to this!