Swimming this morning was pretty much the least enjoyable way imaginable to spend a portion of the weekend. On any day, it is abysmal, with the cramped changing rooms, cold, trickling showers and the inevitability of a key item of clothing ending up in a puddle, but the perishing conditions outside meant that even the swimming pool seating area which is usually so stifling it has me stripping off to barely acceptable levels, was icy. I sat on the side, dithering in my coat, waving encouragingly to my 5-year-old who sobbed throughout. I adopted a similarly jolly approach with the 9-year-old, but nobody was fooled. It was awful. We got home and had medicinal hot chocolate and ginger biscuits.

Perhaps it was the stark contrast to the previous Saturday that made it seem particularly dreadful. Last weekend I had a beautiful time, with a beautiful friend in beautiful Dublin. It was the first time in 9 years that I had been away solo – other than annual 3-day residential trips with my class, which don’t really fall into the ‘relaxing hols’ category. Anyway, it was glorious. Simply three nights without a 5-year-old waking me to inform me of her dreams or demanding breakfast at 6:20, was a total treat, but a night at a lovely spa hotel was the stuff of mum fantasy. We slept in fancy hotel beds and ate a fancy hotel dinner (sea lettuce! Scallops! Not a fish finger in sight!) and swanned around in waffley dressing gowns and impractical velcroed slippers, detoxifying in saunas and having a glorious treatment apiece.

The beauty therapist I had was rather disappointed with me. After the heavenly facial she sat me down, seated herself opposite, and told me, sternly, that whilst my skin was indeed horrifyingly oily, she was actually ‘MOST worried’ about the terrible lines around my eyes. She really did look concerned too. My explanation that I have literally drawers full of moisturisers and serums and eye creams, but can be lacking in motivation in the 11pm/6am time brackets seemed to only make relations more strained.

I have since felt guilty about the mental turmoil I unwittingly inflicted on this perfectly nice woman – I have visions of her tossing and turning at night, haunted by my sun damage and crow’s feet. She offered me solutions: an eye cream and a face mask, which would return me to within normal parameters within three weeks (the precision of her forecast impressed me), fortnightly facials and weekly massages. I considered giving up feeding the children to facilitate this, but in the end decided the whining would age me more than the lines. Instead, in an attempt to make amends, I have applied a face mask I found in the aforementioned well-stocked drawer and have had a large glass of water. I’ll look fifteen in no time…

I’ve even made a smoothie, to show I’m serious about it. It’s hardly a recipe – I am embarrassed to be passing it off as such – but it was delicious. It goes without saying that ratios/ingredients can be adjusted to suit your tastes and larder. I tend to have plenty of frozen fruit in – cheaper than fresh and won’t grow a furry coating in spite if I forget them for a day or two – either fresh or frozen will work beautifully.

Some people, I believe, are very against smoothies on sugar grounds – this may well be valid, I’m no nutritionist – but I see them as a good way of funnelling plenty of vitamins into my little cherubs. 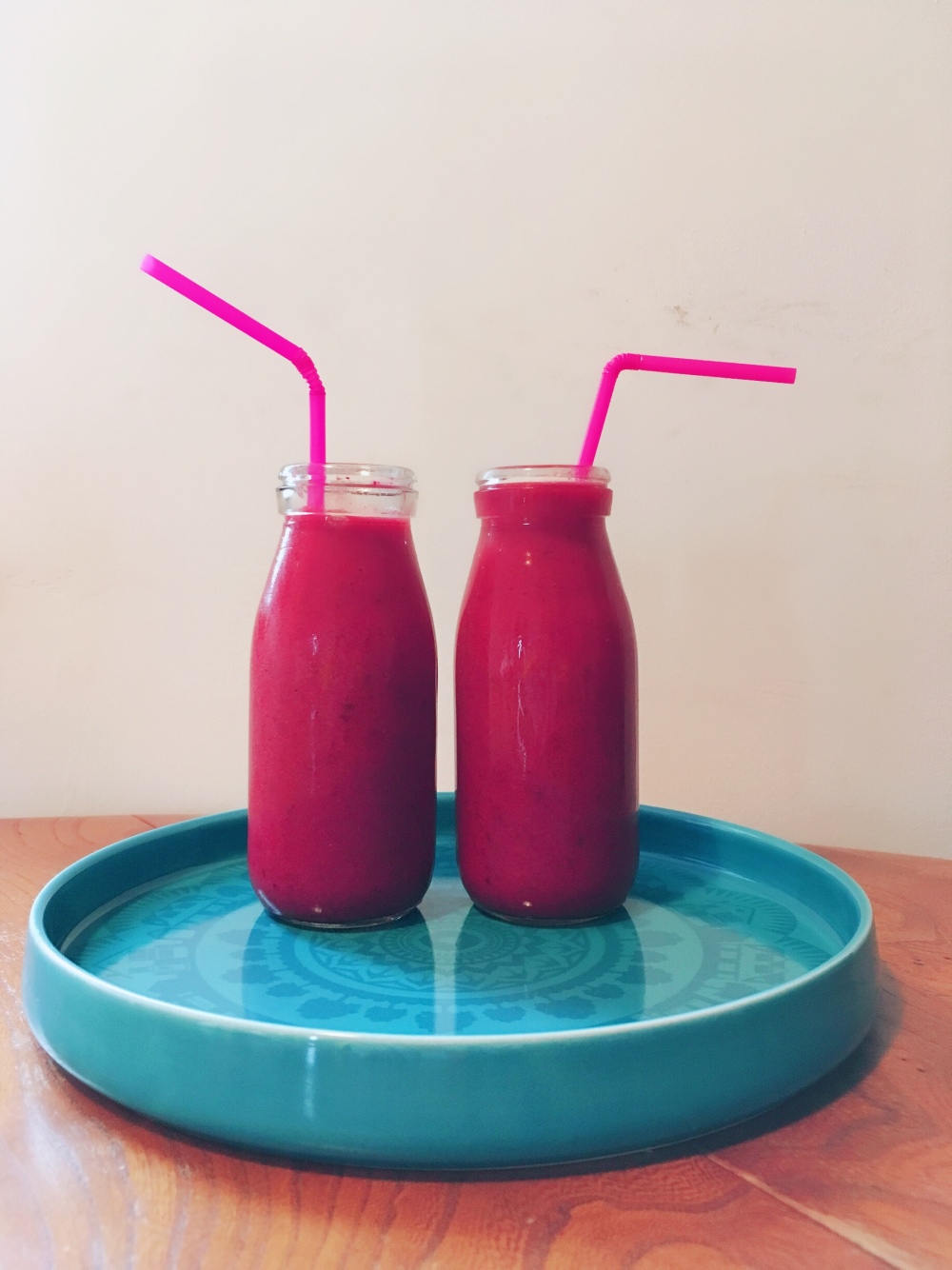 Argument was inevitable considering the iniquity of the portioning.

Ingredients– to make two generous portions, as in the pic.

Throw all the fruit into a blender – softest things nearest the blades – and add a good splash of orange juice. Whizz up and add more liquid if necessary before whizzing again. Repeat until it’s of a consistency pleasing to you. Drink.

We quite often have these for breakfast. I can barely speak at breakfast time and try to get as prepped as poss the night before. I don’t find smoothies keep all that well – they tend to separate in an unappetising manner – but shoving all the fruit and liquid into the whizzing receptacle the night before and popping it into the fridge, to be whizzed in the morning works perfectly.

To make it more substantial you could swap the OJ for milk and yoghurt, and throw in a handful of oats. In this case I’d leave out the citrus. Water/apple juice could also be used. Banana and peanut butter will also making filling additions.

Adding baby spinach to the mix will make it more nutritious without greatly affecting the taste, but will leave it a sludgy brown rather than a pretty red, making it harder to sneak past some diners.