This morning, yet again, I was disappointed by the lack of any sort of medal awarded at the school gates for getting two little minxes in on time; clean(ish), dressed, fed, appropriately accessorised with water bottles and snacks and swimming kit. BUT NOTHING.

Having been woken at 6:00am, thanks to our reliable 5 year old alarm clock, we were certainly up early enough for the necessary to be comfortably achieved in order to leave at the optimal time of 8:20. Indeed, I should have been leisurely sipping skinny lattes and performing lithe sun salutations on the patio before preparing my precious lambkins a nourishing and balanced breakfast of wholegrains and fresh fruit – possibly even chia seed – before a relaxed stroll to school, enjoying each other’s company, relishing the opportunity for some morning exercise and sharing our hopes and dreams for the day ahead.

In fact, the morning was little like that. Scotch pancakes (low in wholegrains, if I’m honest) went down pretty well, but the ongoing battle over The Purple Cup led to a significant hold up. There was almost a riot when it seemed that someone was going to have to use the green beaker – UGH! – why don’t I just throw it away? – but this was resolved with gratifying speed, with some sleight of hand tricking the youngest member of the family.

I didn’t feel 8:26 was the right moment to be involving Barbie and Action Man in a heartfelt discussion over Chelsea’s future, and gently conveyed this to the smallest child, whose little feet were brazenly bare and teeth shamelessly unbrushed. I took a moment to try to understand the workings of time that had allowed two hours to dwindle to 30 seconds and then with some lively encouragement (I’m kidding nobody here – obviously colourful threats were employed) managed to get out of the door at 8:34.

The relaxed stroll, by necessity, became the sort of powerwalk that leaves one gasping for air, which meant the loving conversation/dream sharing was somewhat compromised. As the children were involved in some long-running and entirely incomprehensible dispute, both were thoroughly ticked off that I wouldn’t just DRIVE and my blood pressure was at a dangerous level, this was no bad thing. Incredibly, we made it on time, the children skipped into class and nobody was any the wiser.

At the weekend, when mornings tend to be less agitated and I am less fraught, I occasionally make a breakfast that involves more than simply engaging the toaster. Sometimes I make American pancakes, but more often these. I actually serve them at any time of day – I quite like them for a quick lunch – but they do make a filling breakfast when you’ve got the time and energy to be faffing with a frying pan. They are based on my recollection of a recipe I saw Jamie Oliver make on the telly once. They sound slightly grim if I’m honest – cottage cheese! Bleurgh! – but they are surprisingly more-ish and my children actually cheer when they know they’re going to be having them. (I’d say this is a little extreme.)

All quantities are quite approximate – if the batter seems too runny, add a little more flour, if it’s too stiff add more cottage cheese. If you’re making it for someone who would appreciate such things, a bit of crispy bacon and some chopped jalapenos make very pleasant additions. 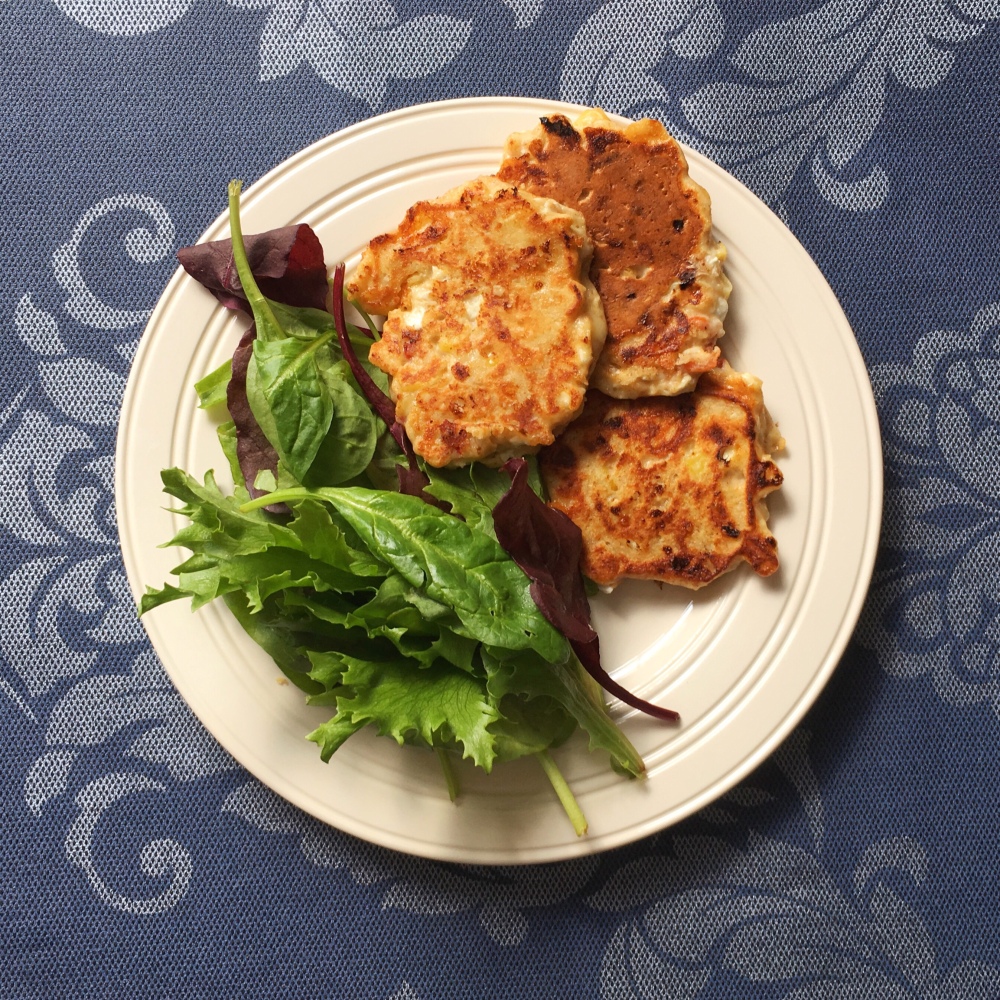 Directions
1 Mix all ingredients apart from the butter/oil together to produce a lumpy and rather unappetising batter
2 Heat butter or oil in a big frying pan
3 Blob spoonfuls into a large frying pan and cook until bubbles appear on the surface and bottom is golden and crusty.
4 Flip over and cook until both sides are golden.
5 Eat alone/with salad/with ketchup/with chilli sauce, depending on the demographic of diner and time of day.